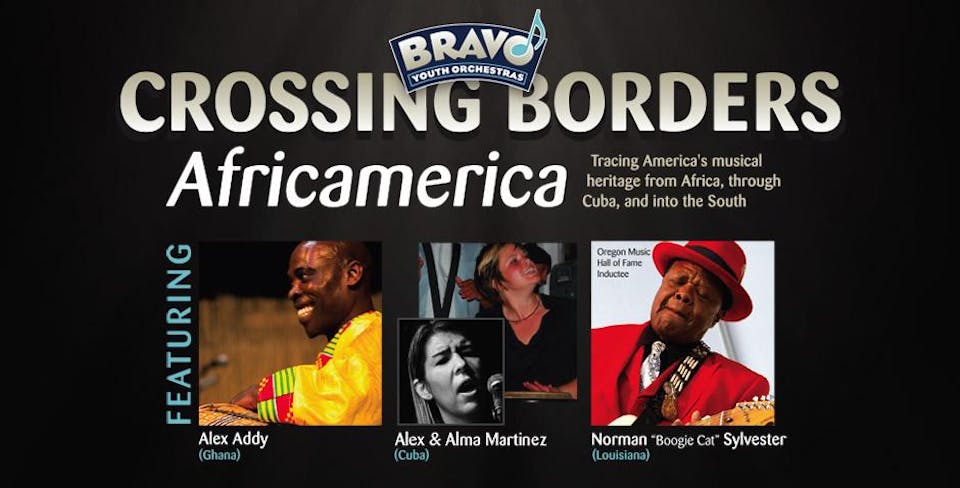 This Event is All Ages and Reserved Seating.

Tracing America's musical heritage from Africa, through Cuba, and into the South

BRAVO Youth Orchestras’ annual fundraising concert that brings together youth and world-class musicians. This year’s theme is Africamerica, with music from Ghana, Cuba, and the United States, featuring Alex Addy, Alma and Alex Martinez, and Norman “Boogie Cat” Sylvester alongside our outstanding BRAVO student musicians. Special appearances by Darrell Grant and Oregon Supreme Court Justice Adrienne Nelson. This concert has grown in scope and sophistication every year, so get ready for an incredible afternoon of music from around the world! #year4 #CBIV

Justice Nelson is the first African-American to serve on the Oregon Supreme Court in its 159-year history. She grew up in Arkansas, moved to Oregon in 1993, and served as a Multnomah County Circuit Court Judge from 2006-2018. She was appointed to the Supreme Court by Governor Kate Brown in January 2018.

An experienced instructor, professional dancer and accomplished percussionist, Alex Addy was traditionally trained in Ghana before moving to Portland at the age of 15. Alex comes from a long line of family drummers and is the son of Obo Addy. Alex teaches the five hand techniques of Ghanaian drumming and believes in students working together to create a strong communal rhythm, yet embrace the confidence to use one’s voice in a solo. He has taught at Lewis & Clark College, Open Meadow Alternative Schools, The Higher Stages Program, Right Brain Initiative, Young Audiences, Saturday Academy and SUN School programs throughout the city.

Alma Martinez is a 1st generation Cuban-American from Miami, Florida. She has been drumming since the age of 12. Her musical influences include: Los Van Van, La Fania All Stars, Steve Gadd, and Cuban percussionist Mongo Santamaría. While in high school, she was fortunate enough to attend several IAJE conventions where she got to play alongside Latin jazz greats Ed Calle and Ignacio Berroa, among others. In Miami, she was a regular fixture playing percussion and/or drums on the local band circuit. She now lives in Vancouver, WA and gigs occasionally around Portland and SW Washington with her spouse, singer-songwriter Alex Nicole.

A gifted guitarist, singer, songwriter, and cover artist, Norman Sylvester, “The Boogie Cat,” is one of the most engaging showmen in the Northwest, headlining at weddings, festivals, and clubs, and spearheading the annual “Healing the Healthcare Blues” fundraiser. Born in Louisiana in the 1940s, the Boogie Cat made his way to the Northwest in 1957 but did not leave his southern roots behind. A self-described “family and community first musician,” Norman Sylvester has mentored many young musicians and has held residencies at various Portland public schools. Over the decades, The Boogie Cat has achieved legendary status in the local music scene. In 2011, he was inducted into the Oregon Music Hall of Fame, and in 2019 he was immortalized in a mural commissioned for the Portland International Airport.

A pillar of the Portland jazz community, Mr. Grant is a creative artist who harnesses the power of music to create change. He chairs the Jazz Studies Department at Portland State University and is the Vice President of the board for Chamber Music America.